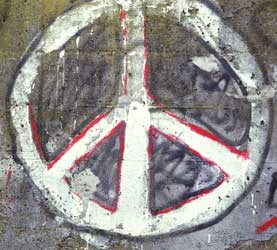 It is instantly recognizable as a sign of peace, but what is the symbolism behind the peace sign?

The olive branch came from ancient Greece, the dove from the Bible … but where did that circle with the chicken-footprint come from?

Rewind back to 1958 when London textile designer, Gerald Holtom, wanted to create a symbol for marchers to carry on banners and signs at a "Ban the Bomb" march planned by the Direct Action Committee Against Nuclear War (DAC). The event was Britain’s first major demonstration against nuclear weapons -- a 52-mile march from London to the town of Aldermaston, home to an A-bomb research center.

Members of the DAC came to the march emblazoned with Holtom’s circle-with-lines symbol; but to bystanders, its meaning was a mystery.

Nowadays we all know what the symbol stands for, but what is the meaning behind the design? Holtom created the symbol by combining flag semaphore signals, an alphabet signalling system where flags are waved in a particular pattern to symbolize different letters. The system was used in the maritime world in the 1800s to convey information at a distance.

Holtom used the signals for the letters "N" for nuclear and "D" for disarmament and put them in a circle. The symbol is essentially a logo for the concept of nuclear disarmament! Such graphic elegance.

Later the symbol was adopted by the Campaign for Nuclear Disarmament (CND). In 1960, the peace sign was imported to the United States via a peace sign button brought from the U.K. to the U.S. by Philip Altbach, a freshman at the University of Chicago.

The symbol had shown up here and there in the U.S. prior to that, but when Altbach convinced the Student Peace Union to adopt the sign as its symbol, the popularity of the peace sign grew immensely. By the late 1960s, the peace sign had become an international symbol adopted by anti-war [pro-peace] protesters, and it doesn't seem to be losing steam any time soon.

May we have peace on Earth. It always begins with ourselves.

Comment by Alexa on October 8, 2010 at 3:54pm
I know. And just last month, I (really) said to my hubby "I wonder where the peace sign came from?" then I stumbled on this. The hand signals are pretty cool!