What is a Yogini, What are we recovering?

Some thoughts for today. ~ with love.
What is a Yogini, What are we recovering? A yogini is a spiritual practitioner dedicated fiercely to Truth and her Love affair with Infinity. In general Yoginis are Highly Sensitive People (hsp's, empaths, intuitives, and sensitive to energy, belief systems, universal systems, feelings//emotions and all of life), often considered gifted (or a bit crazy!) by those who do not experience energy the same way, and hold a natural life-long connection to Nature, ecosystems and the environment, animals and all sentient beings, creativity, energetic structures, inspiration in many forms, cosmic realities and the heartfelt-soulfelt desire to end suffering for all living beings. Yoginis embody and live their spirituality through regular daily lives, and sometimes feel extra challenged and in greater need of rest, balance and time to reconnect and reflect here too.

Additionally, if a highly sensitive yogini grows up in a dysfunctional family or has experienced any other type of significant life trauma(s), and many things are overwhelming for younger and even older sensitive souls, they may find it more highly traumatic than even most children/people would. and require greater recovery time; but they, as all people who experience deep life experiences - significant illness, abuse/neglect, feeling the suffering in the world, and/or grief and loss, also have high potential to develop greater Awareness, the deeper compassion and wisdom of experience and a broader more accessible spectrum of Awakening as well. It is an interesting mix and depth. with enormous potential for Spiritual Development and Self Realization.

In general, whether folks realize it or not, everyone must learn to recover themselves to some degree in an unconscious and unawakened, dysfunctional and always challenging, though also incredibly stunning and magical, naturally abundant, multidimensional world. The Yogini feels it all, the yin and the yang, and works to blend and harmonize life both in her body, and in the world.

Namaste
Alexa Major, Ashikia Eagle Feather (the name the dolphins gave me)
photo below:
Shambhavi Chopra has an exquisite vision of a Yogini;
a true Yogini is an embodiment of exuberant passion, spiritual powers and deep insight. Aham Prema
I am Divine Love
"A Yogini is one who is possessed of magical powers,’’ so we find in the Thousand Names of Goddess Bhavani. Yet the foremost of these magic powers is not the power to change the external world but the ability to realize the Divine reality within ourselves. In the mythology of the Devi (Goddess), the Mother archetype shapes herself through mystery, beauty and abundance pervading all of life. The supreme Shakti of Para Shiva, the Absolute Reality, She is ever willing to create, yield or generate universal energies. She is the supreme ruler of the universe who can grant all blessings and assuage all sorrows. The Yogini reflects her energies in the human world.

A true Yogini is an enlightened woman with exuberant passion, spiritual powers and deep insight. A woman attaining a transcendental state through sadhana becomes a celestial Yogini, a female adept at Yoga. She carries the energy of the Goddess within herself. The Yogini unfolds the mystic beauty and power of the Goddess through her transformational force of the Divine feminine. The Yogini’s benign nature leads one to the supreme reality of oneness, which is an ever blissful state, resting in the inextinguishable flame of the spiritual heart.
Yoginis communicate a sense of freedom and a sheer mastery in whatever they do in life, whether it is mundane activities or deep meditation. Their compelling gaze can hypnotize even a great yogi. In the ancient literature, it is said that Deities called Yoginis are capable of changing their physical forms at will, carrying all of nature in their demeanor and expression. There are sixty four such Yoginis through which the secret forces of nature operate.
full article: read more,
http://www.tathaastumag.com/archivecon.php?hid=1700&issueid=74 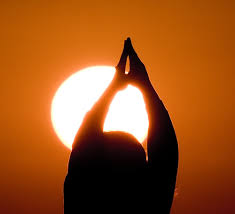 A yogini is fluent in angelic, diva and in Kali roars.
Earth is home and so is infinity.
She is passionate about truth, freedom, rest and real love… for all.
She is an instrument of awakening in the world by her fearless commitment to showing up authentically and generously.
Yoginis align with the dignity and grace of the feminine warrior, and touch infinite compassion, silence and beauty beyond measure.
~ Chameli Ardagh