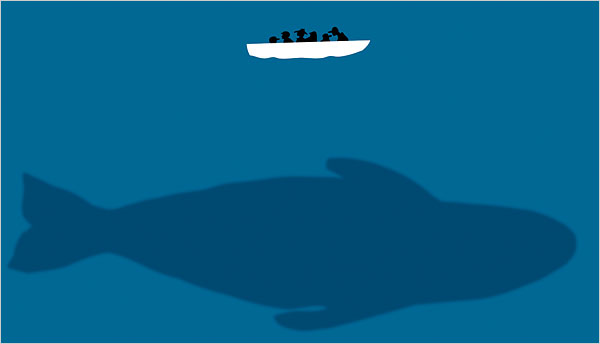 In yesterday's New York Times Magazine ("Watching Whales Watch Us"), author Charles Siebert lays out a compelling case for what many people have long suspected: that great whales are conscious, social, interactive animals with complex social structures and cultures. The article is beautifully written and full not just of anecdotes of remarkable whale-human interactions but interviews with leading scientists who have documented that whales teach, learn, cooperate, grieve, and even use tools in their quest for food.


Using the 'friendly gray whales" at Laguna San Ignacio on the west coast of Baja California as the touchstone, Siebert covers a range of topics in making his case - from military sonar (calling NRDC's litigation to control it a "turning point" in the relationship between humans and whales) to commercial whaling to personal and historical anecdotes of interactions with these massive creatures in the wild. He suggests the remarkable proposition that these ancient creatures, once hunted virtually to extinction by humans, may somehow have learned now to forgive and even trust us, in spite of our centuries-old efforts to slaughter their ancestors for oil and other whale byproducts. Siebert argues that whale-human relations have long been characterized by a "stark dualism: manic swings between mythologizing and massacre; between sublime awe and assiduous annihilation, the testimonies of their slayers often permeated with a deep sense of both remorse and respect for the victims."


And nowhere is this more clearly the case than at Laguna San Ignacio.


At this extraordinary place - now a World Heritage Site, a biosphere reserve, and the last undisturbed breeding and calving lagoon of the California gray whale - this large baleen species that migrates each year along the west coast from Alaska was hunted by whalers like Charles Scammon, who would trap the calves in the shallow lagoon as a means of enticing the full-grown mothers within range for harpooning. After reaching near-extinction at levels below 1,000 whales, the species began to rebound when commercial whaling was outlawed in the mid to late 20th Century, with the eastern Pacific gray whale stock now reaching an estimated 18,000 gray whales at least - one of the most dramatic recoveries of any large whale species. It is in this lagoon today that whale-watchers come every winter to ride the protected waters to see and even touch 40-ton, 45-feet long wild animals and their babies in their natural habitat.


As but one example of the continuing, post-commercial whaling threats to these magnificent animals, it was in this lagoon that, in the 1990's, Mitsubishi Corporation and the government of Mexico proposed to build the world's largest industrial salt works - 116-square miles of industrial development, with 17 enormous diesel pumps sucking 6,000 gallons per second from the lagoon 24-hours a day; a million-ton stockpile of salt; a two-kilometer pier into the Bay of Whales where ocean-going tankers would dock to receive the salt for transport to Japan; and billions of gallons of toxic salt brine, stored in ponds adjacent to the lagoon and eventually dumped into coastal waters. Together with the largest environmental coalition ever formed in Mexico and the International Fund for Animal Welfare, NRDC mounted the largest public campaign in its history to challenge and, against tremendous odds, ultimately defeat the salt works project. Now, ten years after President Zedillo of Mexico announced that the project would be abandoned, NRDC and a coalition of international and Mexican non-profits have undertaken a conservation initiative to preserve in perpetuity one million acres around the lagoon through easements and land acquisition - to ensure that the whales will be protected from a return of the salt works project or any other major development.


This is a success story, but the international struggle to protect and restore whale populations around the globe will never end. Charles Siebert's article is a powerful statement of why that struggle, by NRDC and others, is essential.