Mayan 'Death and Rebirth' Date: A New Start in Attitude 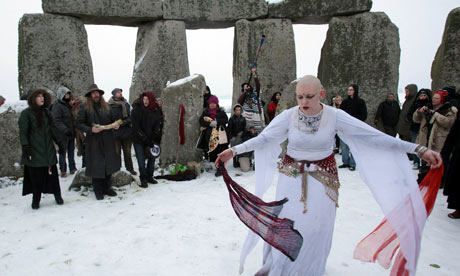 The winter solstice is marked at Stonehenge every year, but this year it coincides with the end of an era in the Maya calendar. Photograph: Matt Cardy/Getty Images

The winter solstice is marked at Stonehenge every year, but this year it coincides with the end of an era in the Maya calendar.

'Progress' has brought ecological disaster and the wipeout of species. As the winter solstice arrives, we may not be facing apocalypse but a fresh start in our attitude to the world order

At 12 minutes past noon last Wednesday, 12.12.12, 12 minutes of wintry stillness was broken by the low chime of a gong. The crowd gathered around the Chalice Well beneath Glastonbury Tor linked hands, looked skywards, then touched the earth. A multitude of others did the same across the world – only this place, as everyone knows, is rather special.

For many people, these days between last Wednesday, 12 December, and the winter solstice on 21 December next Friday constitute a portal of some kind, based upon a convergence of predictions in ancient calendars, notably that of the Maya in what is now Mexico and Guatemala. According to the Maya, the 13th baktun reaches completion on Friday, in what they called the Long Count of time. The moment is taken by some to mean the end of time – those who perhaps prefer the idea of apocalypse Hollywood-style to the prospect of grinding on – and by many more to herald some new era in which battle will be done between those who would protect the planet and those bent on destruction.

Just in case, there will be a Party At the End of Time on solstice eve, at an outdoor location near Glastonbury Tor. It should be more fun than the last time I went to witness the end of time, on assignment for the Washington Post in 1988, with fundamentalist Christians in North Carolina. They had to switch to an escape-plan interpretation of the scripture at stake, reluctantly reopening their shops, rather than being called to be "saved".

To many folk, especially those bound to the materialist order and narrow politics, all this Mayan caper is mumbo jumbo. Others are so dogmatic about its importance they become tedious. But in between there will be those tempted to ponder that the Maya may have been on to something; those for whom the moment does present an opportunity to reflect above and beyond latest news on the royal sprog or from No 11 Downing Street. After all, Christmas and new year are a round of "reflections" from pulpits and television screens, and they come around far more regularly – a baktun is a measurement of 144,000 days, more than 392 solar years.

Scholars, "Mayanists", archaeologists, astronomers, mystics and new-age phoneys will debate what, if anything, the Mesoamericans intended the completion of the 13th baktun to signify. We can be fairly sure that it was not the end of time: the Maya foresaw "distance dates", inscribed into the stones at Palenque in Chiapas, Mexico, that foresee time stretching for 2 quintillion years longer than the entire life of the universe that is agreed upon by many modern cosmologists.

The Maya were no fools. Likely inventors of the figure zero, their mastery of astronomy – bequeathed to history through various codices and stoneworks – was breathtaking not only for its time, but for all time. Their systems for measuring time were more sophisticated than ours, with pivotal numbers of 13, 18 and 20, based upon lunar, Venusian, astronomical and mathematical measurements, and expressed in glyphs. Unlike us, the Maya had the far-sighted sensibility to distinguish between the calculation of a "short time" calendar round (made up of 52 260-day years) and a Long Count of katuns and baktuns.

Next Friday, as the solar year turns, we shall be entering baktun 13.0.0.0.0. And why should not this be significant, the end of something, and beginning of something else? The trajectory of the world we call "civilised" since the Maya measured the future has seen Renaissance, Enlightenment, an age of romanticism and revolution, the rise of science and proliferation of what we like to call "democracy". We worship the notion of progress.

Indeed, progress is the one thing that every belief (especially self-belief) that drives our world depends upon. All monotheistic religions are by definition eschatological, towards either redemption or damnation. The rise of capitalism to its present state insists that the march of the market is an indicator of "progress" and "freedom". Those on the left define themselves as "progressive" as though progress were a given towards some dawn of humanity. Aristotle gave all this a name – Telos, procedure through time for a purpose, a "final cause".

But what if all this is untrue? What if the monotheist promise of salvation is balderdash? What if the capitalist notion of an entwinement between the free market and democracy is as absurd as it is outrageous? What if the left's inevitable "progress" towards equality is a fraying fantasy?

In the once-Mayan Americas: a raging drug war – from which the rich and banking system profit handsomely – with no end in sight; while a respite for Latin America faces the incursions of mining companies in the rush to gouge out what are called "commodities" in the earth and mountains.

In Britain, in the American superpower and many other places, government by the greedy on behalf of the greedier deepens the gap between rich and poor, back to the bad old days of a century ago – only now the movement is in the wrong, widening direction.

Across Africa, people starve, though much of the continent is under glass, growing food for those in the developed world. In Asia, a new industrialised economy is based upon wage slavery, and wars of religion spread.

Everywhere: there is worship of technology, "communication" and supposed connectivity, though so often in isolation and unable to connect the ubiquitous gadgets with the conditions under which they are made. Everywhere: the lucrative sale of ever-deadlier weaponry. Everywhere: the advance of more sophisticated methods of surveillance and control.

And everywhere: environmental crisis and extinction of species. At home, the "greenest government ever" prepares to pave the "green and pleasant land" about which it sings at party conference beneath a layer of concrete, Tesco, Travelodge, B&Q. To that, last week, add fracking for shale gas. Across the world, the dual crises of climate change and finite resources meet with denial, hollow intentions and the generation of energy for profit and profit alone. In the face of calamity, business as usual: "development", "growth", "progress" … to the point of planetary, animal and human asphyxiation. Anyone who questions this "progress" is "Luddite". Anyone who mourns what is forever lost is "nostalgic". To advocate fair distribution of the means of production and exchange is to be "communist", as it was in the US in the 1950s. To defend nature is to be a "tree-hugger", ignorant of economic reality.

Telos is rampant, this form of "progress" set in stone, for all the brazen indicators as to where turbo-capitalism is taking us. Not by minds of the calibre of Plato, but those as dogmatically determined as the commanders of the post-modern, post-political world – the cartel of finance, the new corporate order and its political servants. The awful truth is that most functionaries in government bureaucracies, corporate hierarchies, sweatshop assembly plants, and so-called "security" forces that make up this modern order believe in the march of progress.

But there exists also a multitude which rejects it. And for many of these refuseniks, the symbolism – if not actuality – of this phase in the Maya calendar is important. We do not face Armageddon, but we do face catastrophe. Those around the wellhead on Wednesday would call it a catastrophe of consciousness, as well as everything else – among those masters of war, as Bob Dylan called them half a century ago, and the high priests of greed unleashed, and their troglodyte subject-followers.

If there is to be a future of quality for the planet and its species, these days must mark the start of a new era of sorts. We need to see this  "progress" for what it is: a dangerous and destructive fantasy. And Telos as a lie.

The Party At the End of Time beneath the Tor will no doubt be a terrific night, but it needs to invoke the dawn of something too. If there is no fundamental  change, the completion of the Maya's 13th baktun marks not the end of time, but rather the end of hope.

SOLSTICE – THE LONG AND SHORT OF IT

The word solstice comes from the Latin phrase for "sun stands still".

The winter solstice marks the official onset of winter. The sun is at its lowest, meaning shorter days and longer nights.

The solstices happen twice a year when the Earth is tilted on its axis by a maximum 23.5 degrees as it orbits the sun.

The shortest day of the year, the winter solstice, is essentially the year's darkest day, but it's almost never the coldest, as oceans are slow to heat and cool and the seas still retain some warmth from summer.

The stones at Stonehenge are aligned with the sunlight on both the summer and winter solstice. These times told prehistoric farmers that harvest was coming or that the shortest day had passed.

Recent excavations of animal bones at the site suggest huge midwinter feasts were held, with cattle slaughtered  for the solstice celebrations.