Is Your Brain stuck in the past? 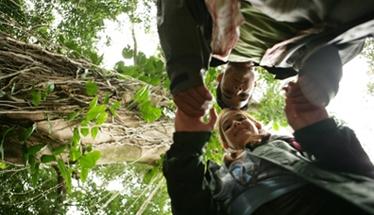 How to power up a healthier mindset.

Enlightenment. This elusive state has been the focus of some of the greatest minds throughout history. Thousands of people have dedicated their lives to its pursuit. We see images of monks sitting peacefully on meditation cushions . . . nuns kneeling in prayer . . . shamans living in the wilds of the Amazon. And while these representations of enlightened individuals may be accurate, they also imply that this desired state is reserved for a privileged few.

We believe, however, that enlightenment is available to all those who are willing to dedicate the time and effort necessary to attain it. Finding this state does not require a lifestyle that is incompatible with surviving in the modern Western world. And the rewards of enlightenment are not limited to the attainment of spiritual knowledge enjoyed by the contemplative mystic. They can also be reaped in the discovery of DNA sequencing by the innovative scientist, the preparation of a mouth-watering meal by the inventive chef, or the creation of an inspiring masterpiece by the insightful artist. We believe that enlightenment promises everyone the possibility for innovation, extraordinary creativity, and inner peace.

We also believe that the search for enlightenment can be accelerated by following a practice focused on awakening the power of the higher brain. When our higher brain functions are engaged, we have the potential to change our lives both spiritually and biologically.

But to achieve this desired state of consciousness, we must not only master ancient enlightenment techniques but also restore the brain’s health at the cellular level.

Is Your Brain Stuck in the Past?

Anger, fear, jealousy, greed, and worry, while commonplace, undermine our inner peace and sense of self-worth. But even on a weekend meditation retreat or during a walk in the quiet and stillness of the woods, the mind continues to chase thoughts, compose to-do lists, and fret about activities not yet completed and situations not yet resolved. Hard as we might try to sit quietly and empty our mind of thoughts, it continues to gravitate toward the unfinished business of our past.

Why does your brain rely on the neural networks created by the prehistoric, survival-at-all-costs brain regions—the reptilian brain and the limbic brain—instead of operating at its optimal level of functioning? How do you overcome the toxic emotions of your old wiring, the conditioning based on negative experiences from the past?

By healing that prehistoric brain, you engage newer, higher, more evolved brain structures—the neocortex and, specifically, the prefrontal cortex—which will help you eliminate fear, poverty mentality, and anger from your life. This is done through the creation of new neural networks in your brain.

Until quite recently, most brain researchers held that, even though the brain is malleable in the early years of a child’s development, the window of opportunity for changing its wiring slams shut by around the age of seven years. While it is true that the brain of a fetus or a young child is like a dry sponge, with the potential to soak up all the knowledge, beliefs, and behaviors it needs to survive in its new worldly environment, the premise that the brain can no longer be rewired past a certain early age has now been upended.

Leading-edge research now confirms that we can grow new brain cells and change the actual networks in the brain. Once we provide our neurons with specific nutrients lacking in our everyday diet and embark on stimulating new activities, we can establish new neural networks that help transform limiting beliefs and behaviors and recapture long-lost feelings of joy, optimism, and tranquility.

In the language of neuroscience, enlightenment is the condition of optimal mitochondrial and brain functioning that allows us to experience both well-being and inner peace and the urge to create and innovate. Mitochondria are the energy factories at work within your cells. They impact your moods, your vitality, your aging process, and even how you might die. They are also in charge of the elimination of old cells and replacement with new cells, a function that occurs automatically, without your conscious awareness.

The mitochondria are influenced by the foods you eat, the amount of calories you ingest, the extent to which you exercise your body, and the inclusion of specific nutrients.

What if you could gain access to keys encoded in your mitochondrial DNA that, until now, have been password-protected? When you unlock this code, you break free of the illness-ridden journey that many Westerners suffer from cradle to grave. With your mitochondria restored, your cells will be able to express the genes that promote brain health and physical longevity, and you won’t have to continue perpetuating the ills and traumas of your family of origin.

David Perlmutter is the author of: The Better Brain Book and Raise a Smarter Child By Kindergarten, and is recognized internationally as a leader in the field of nutritional influences in neurological disorders. Website: www.DrPerlmutter.com

Alberto Villoldo, Ph.D., is a medical anthropologist who comes from a long line of Earthkeepers from the Amazon and the Andes. The author of numerous best-selling books, Dr. Villoldo currently directs The Four Winds Society in Park City, Utah, where he trains people throughout the world in the practice of energy medicine and soul retrieval. Website: www.thefourwinds.com

another article from this writer today:

How patients regain their health. The healing energy of the Divine.

As we followed the shaman up the mountain along the ancient stone pathway crafted by the Inca some six centuries ago, the silence was broken only by the sound of his flute. Our destination was Ollantaytambo, near Machu Picchu, not only one of Peru’s best-preserved archaeological sites but also a site of great spiritual significance.

My companions seemed to be energized by their spirited endeavor, yet I was more concerned with the pounding in my head. The shock to my body of traveling quickly, from sea level in Florida to almost 10,000 feet in the Andes, focused my attention on the inescapable fact that I was suffering from shortness of breath and blurred vision. Thankfully, my wife and two children seemed less affected.

One of the shamans traveling with us noticed my distress and offered me a handful of coca leaves to chew. I decided to try it instead of the acetazolamide I carried in my backpack in case of high-altitude sickness. Soon I felt numbness in my mouth and, very quickly, my symptoms disappeared!

How did this descendant of the Inca know that the leaves of the Erythroxylum coca plant could help with the symptoms of high-altitude sickness? The obvious answer is that it was the benefit of ancient wisdom, yet that only partially satisfied me. It seemed improbable that some hapless forebear had been chosen to chew his way through all the local plants to check their medicinal use. Meanwhile, my companion studied my countenance, much as I would observe my own patients. Meeting his gaze, I realized that his knowledge of the coca leaf did not come from lessons learned but was rooted in a profound knowledge of soul and spirit—not a concept that sat easily with my Western medical training, and yet I felt moved to accept it.

My journey to the Andes was inspired by my wife after she had read several books by Dr. Alberto Villoldo. We chose this expedition because Alberto was leading it, and it was not long after my healing encounter that I had a chance to speak with him. I asked Alberto about the shaman’s apparently unique ability to access complex information by means of intuition.

“It is not knowledge that comes from others,” he said. “It comes from the source of all knowledge, which is Great Spirit. The sages are able to tap into this wisdom, and to a certain extent we all have the potential to do this, not just indigenous peoples. After all, there have been individuals throughout the ages and in all cultures who were considered enlightened.”

I returned to my medical practice serving patients with a variety of challenging brain disorders, my treatment plans always integrating lifestyle issues and nutritional interventions with standard pharmaceutical-based approaches. This less than traditional neurological methodology allowed me to gain a deep understanding of health issues while retaining a mindset that was open to new ideas.

Nevertheless, I continued to be challenged by patients who suffered diseases that were well beyond the scope of neurology alone, including cancer, advanced arthritis, diabetes, and other, equally challenging disorders.

I began to focus on the small but growing number of patients who were actually able to regain their health despite what could have been a diagnosis of incurable disease. What was it about these patients that turned things around? The answer was presented to me late one Friday afternoon during a consultation with a woman suffering from chronic progressive multiple sclerosis.

We had placed Beth on our standard array of nutritional supplements, specific essential fatty acids, and nutrient injections for the disorder several years before. Although her decline had slowed somewhat, she was forced to use a walker and even a wheelchair at times. That afternoon, however, my staff and I were astounded to see her walking down our hallway unassisted.

“We are putting you on our miracle list,” I told her, referring to the growing number of our patients whose improvements could not be explained by medical science.

In the examining room, we explored what had changed in her life and to what she attributed her miraculous improvement.

“I have been studying shamanism for a few years,” she replied, scrutinizing my face for any sign of familiarity with the term.

“Basically, I’ve gained the ability to tap into what I call healing energy,” Beth continued.

Over the coming months, I began to notice that we were putting more and more people on the miracle list. And it was becoming clear to me that, overwhelmingly, the patients who achieved the most profound recoveries were those engaged in some form of meditative or spiritual practice. Whether they repeated affirmations, meditated, or prayed in some fashion, virtually all of these patients were somehow connecting with what the shaman had referred to as the Great Spirit.

Over the next three years, my encounters with Alberto evolved into a close friendship, and we realized that we should put our heads together and collaborate. For it had become clear to us that access to the Great Spirit or Divine Energy—that natural force which is called by so many names—is available to all. In a sense, we are all shamans, and the most advanced teachings in cellular biology are validating lifestyle activities that, for centuries, have been paving the way to enlightenment through meditative practices not just for the chosen few but for all who care to learn.