Intention Set In Stone - from DailyOM 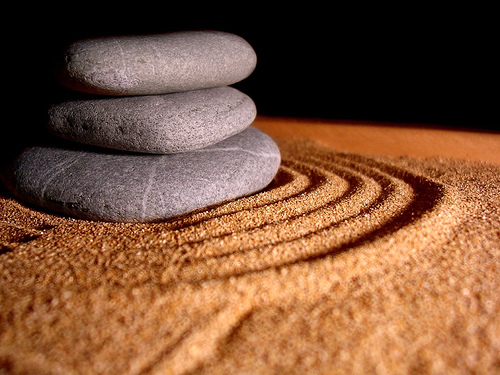 Out in nature, mindfully placing a stone on a stone pile leaves a prayer in its wake for those that follow after you.

Stone has played a role in spirituality from the very moment humanity externalized its sacred vision. Humans gave form to their devotion by scratching images of their deities into rock faces, carving holy statuary, and building stone shrines. The earliest of these were nothing more than simple piles of rocks that honored sacred places, revelations, people, and events. Following in the footsteps of this ancient tradition provides us with a simple and beautiful way to externalize our own spirituality. In your travels, you may have encountered on the sides of roads, trails, or pathways stacks of stones that look like random sculpture. Add a stone blessed with a prayer to such a mound, and your intentions merge with those who have left stones before you, empowering you all.

Associating a prayer with a particular stone alters the substance of both, and the formation of a prayer mound can balance and intensify the energy of a site. The mere act of choosing a stone can inspire mindfulness, as we lose ourselves in the moment seeking a pebble that speaks to our souls. And placing a prayer stone on a towering cairn is a meditation in patience—slowness and stillness allow us to find our stone's center of gravity so the delicate ceremonial structure before us remains intact. Be cautious, however, when you feel guided to place a prayer rock upon stone mounds you see intermittently alongside well-worn but unmarked hiking paths. Hikers often use small cairns as guide markers to ensure that those who follow in their footsteps will not lose the trail. When in doubt, begin a new prayer pile slightly further away from the path itself and consider adding a relic of some kind to help others understand its purpose.

When you mindfully place a prayer by beginning a stone heap or adding to an existing mound, your thoughts and intentions are left in the care of fate itself. The cairn of which your prayer was one part may be unintentionally knocked down or destroyed by Mother Nature's own hand. Try not to let this weigh heavily upon your spirit. The potent energy of your prayer was released by this destruction, ensuring that the purpose underlying that prayer will spread outward in the direction of the furthest reaches of the universe.