For the Love of a Dolphin

Ever go to a dolphin show? Think about what it's like from their perspective. The too-small cement enclosures echo their incredible sonar back to them at unbearable levels. and they are unable to swim the hundreds of miles they are by nature meant to swim each day.

Many knock their heads up side the enclosures in response to the trauma they face living in these conditions. And these highly intellegent beings are forced to "perform for food". It is no wonder an occasional whale will kill it's "master". It is only because they are so docile, they only kill for food in the wild, that they do not kill their slave masters more frequently.
I am sure many of these "dolphin and whale circus trainers" feel love for their trainees. But this is not love. Love is granting and supporting their freedom and protection. And I am sure when they realize this they will feel very badly. but this can be prevented with sharing more awareness of their plight. It's a tough situation. But one that may be healed with awareness. They also do some great rehabilitation at these places. So that can be the continued effort and purpose for those who work in this arena. And it is currently an arena for theater of the unconscious. Dolphins and whales deserve to live free.
8.14.2012
For the Love of a Dolphin ...
A Dolphin Connection, by Alexa Major Zipf I have swum w/wild ocean dolphins four times. The first was in '95 when I had an intimate one-on-one conversation and sonar session with a large atlantic bottlenose. I called to him and he swam from some distance to meet me. I was diving as deeply as I could, and he surprised me by coming and "standing up" full-length in front of me underwater.
We were face to face, heart to heart, feet to fluke. Then I put my hands over my heart and sent love energy to him. "I love you! We love you!" I said (telepathically) as I sent energy from my heart to him with my hands. He smiled and chattered away with me out loud and gently sonared me too. Then he invited me for a dolphin swim! Oh, that I could have kept up with him. It was so natural for me. It felt easier to connect with him than with people at the time. It touched my soul in such a natural and indelible way. I still carry that connection with me now.
Another time I got to do some underwater video with them, just for fun. It was a group of super playful spotted dolphins off of the bahamas. Such hams! They love human gadgets and toys, like cameras and underwater motor-scooters. The general rule is to swim with arms behind your back and not to touch them out of respect. I don't like to see them in captivity. 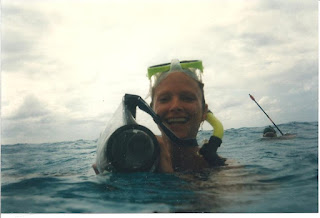 filming & playing with wild dolphin friends
and the Dream Too team, Atlantic Ocean, '96
I saw my first whale breaching in Coasta Rica in 2001. It was the second most peaceful experience I have ever had. A huge pacific grey whale mother and her baby. They moved so slowly, so incredibly peacefully, alongside our boat, and with such grace. She also did a slowwwww and magestic tale flip. I cannot describe the depth of peace she carried. A true meditation in presence. In their great presence we truly come into the power of Now. We were also among hundreds of dolphins on that trip. It was the first time I saw the flamboyant Spinner Dolphins. They are fast and fantastical and high energy. They are quite thin and shoot up high into the air, spinning 'round and 'round and 'round.
The fourth was on my honeymoon in Mexico. There were little canoes on the beach, and my hubby said - C'mon! There was a red tide at the time, and I said I wasn't sure I wanted to go. But Eric said (not knowing what was coming, but somehow intuitively), "Yes, come. You're gonna like this."
He rowed us away from shore and towards the horizon. And then, unexpectedly, we began to see fins. Eric whispered, "dolphins!" He had rowed us right into a pod of quiet pacific bottlenoses. They were feeding and focused on some fish below. So not paying us any attention. I wanted to share with my beloved the experience of swimming with them. So I gently slipped from the row boat into the ocean. But the pacific ocean was so murky and dark at that time. And I couldn't discern what or who was below me. I didn't feel safe. So I climbed quietly back onto the boat. And as they were feeding too, we didn't want to disrespect them. So we chose to gently float among them in their presence. And watched them grace the surface. It was magic. And a gift that Eric brought me as we started our journey together as husband and wife. Thanks, honey.
Oct 28, 2008