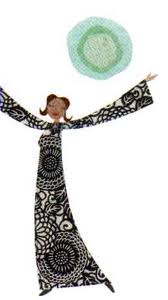 "Love your wrinkles. They show where you have smiled - and the wisdom of where you've lived."

Comment by Alexa on October 4, 2010 at 9:54am
firstlove, I love that, love that, love that. As I continue to watch my own face age, and my shape (and texture) change as well, I am going to keep this powerful poem with me. In fact, I think I will post it on my bulletin board today! I so love this photo as well. You know there are cultures which revere and celebrate the large woman every day. And I had a puerto rican boyfriend in my 20s who told me "I loved to lay in my grandmother's large arms (when I was a child). It felt soo safe and wonderful." and he did revere the beauty in the face of the older woman. A great teacher for me. And I know just what he meant. Those arms feel soooo good!

Oh that we would also revere the wisdom of the older goddess. It's so easy to feel our Truth. and so hard sometimes to not succumb to the pressures of our commercial airbrushed world. Well ladies, we can make this happen!!

Thanks so much Cy!! and Sarah, I am celebrating and loving my wrinkles today too!! Imagine a woman who believes it is right and good that she is a woman. A woman who honors her experience and tells her stories. Who refuses to carry the sins of others within her body and life.

Imagine a woman who believes she is good. A woman who trusts and respects herself. Who listens to her needs and desires, and meets them with tenderness and grace.

Imagine a woman who authors her own life. A woman who exerts, initiates, and moves on her own behalf. Who refuses to surrender except to her truest self and to her wisest voice.

Imagine a woman who names her own gods. A woman who imagines the divine in her image and likeness. Who designs her own spirituality and allows it to inform her daily life.

Imagine a woman in love with her own body. A woman who believes her body is enough, just as it is. Who celebrates her body and its rythms and cycles as an exquisite resource.

Imagine a woman who honors the face of the Goddess in her changing face. A woman who celebrates the accumulation of her years and her wisdom. Who refuses to use precious energy disguising the changes in her body and life.

Imagine a woman who values the women in her life. A woman who sits in circles of women. Who is reminded of the truth about herself when she forgets. Imagine yourself as this woman.