As the war in Afghanistan continues, I find myself thinking about alternative ways this war could be handled. There are no easy solutions. And I was thinking, what would Ghandi do? Here is a tribute to Ghandi. With the hope of recovering peace.

"Generations to come will scarcely believe that such a one as this (GANDHI) walked the earth in flesh and blood. I believe that Gandhi's views were the most enlightened of all the political men in our time"
~ Albert Einstein

"If humanity is to progress, Gandhi is inescapable. He lived, thought, and acted, inspired by the vision of humanity evolving toward a world of peace and harmony. We may ignore him at our own risk."
~ Dr. Martin Luther King, Jr.

"I have the greatest admiration and respect for Mahatma Gandhi. He was a great human being with a deep understanding of human nature. He made every effort to encourage the full development of the positive aspects of the human potential and to reduce or restrain the negative. His life has inspired me ever since I was a small boy."
~ Dalai Lama

"In my life, I have always looked to Mahatma Gandhi as an inspiration, because he embodies the kind of transformational change that can be made when ordinary people come together to do extraordinary things"
~ Barack Obama, President, United States

"Then rose the star of Gandhi. He showed that a doctrine of non-violence was possible."
~ Arnold Zweig 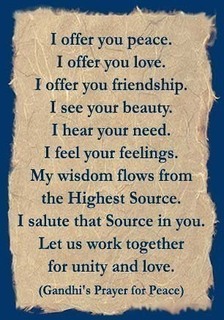 Comment by Alexa on December 7, 2009 at 9:49am
you know, I was just looking at the little "FU" cartoon. Maybe if the taliban could get all of their anger out, seriously, in a healthy way; if they could scream their "FU's" to whomever, including the US for whatever and whatever they are feeling, and be heard, and make their points, maybe, not kidding, maybe that would help. It would take a long time, that would be fine, everyone needs to get that rage and pain out in order to find the peace. It could be a start.