A Tribute to Fathers

President Barack Obama cheers for his daughter Sasha's soccer team in a Georgetown park in May. He writes: "As fathers, we need to be involved in our children's lives not just when it's convenient or easy, and not just when they're doing well—but when it's difficult and thankless, and they're struggling."


Excerpts From This Sunday's PARADE Cover Story:
'We Need Fathers To Step Up'
by President Barack Obama
published: 06/21/2009


Two days before the inauguration, PARADE published a letter from Barack Obama to his daughters about what he hoped for them and all the children of America. On this Father's Day, we asked the President to reflect on what fatherhood means to him.

[Get the story behind the story from PARADE Editor Janice Kaplan.]

Here is an excerpt of President Obama's essay, which appears in this Sunday's issue of PARADE. As the father of two young girls who have shown such poise, humor, and patience in the unconventional life into which they have been thrust, I mark this Father's Day—our first in the White House—with a deep sense of gratitude.

I observe this Father's Day not just as a father grateful to be present in my daughters' lives but also as a son who grew up without a father in my own life. My father left my family when I was 2 years old, and I knew him mainly from the letters he wrote and the stories my family told.

And while I was lucky to have two wonderful grandparents who poured everything they had into helping my mother raise my sister and me, I still felt the weight of his absence throughout my childhood. 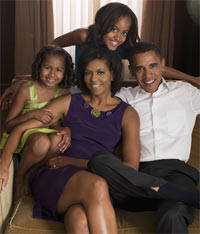 In many ways, I came to understand the importance of fatherhood through its absence—both in my life and in the lives of others. I came to understand that the hole a man leaves when he abandons his responsibility to his children is one that no government can fill. We can do everything possible to provide good jobs and good schools and safe streets for our kids, but it will never be enough to fully make up the difference.

We need fathers to step up, to realize that their job does not end at conception; that what makes you a man is not the ability to have a child but the courage to raise one.

We need to step out of our own heads and tune in. We need to turn off the television and start talking with our kids, and listening to them, and understanding what's going on in their lives.

I know I have been an imperfect father. I know I have made mistakes. I have lost count of all the times, over the years, when the demands of work have taken me from the duties of fatherhood. There were many days out on the campaign trail when I felt like my family was a million miles away, and I knew I was missing moments of my daughters’ lives that I'd never get back. It is a loss I will never fully accept.

On this Father's Day, I think back to the day I drove Michelle and a newborn Malia home from the hospital nearly 11 years ago—crawling along, miles under the speed limit, feeling the weight of my daughter's future resting in my hands. I think about the pledge I made to her that day: that I would give her what I never had—that if I could be anything in life, I would be a good father.


Related Features @ www.parade.com
1. When The White House Calls
2. Barack Obama on Fatherhood
3. Barack Obama: A Letter to My Daughters